This course takes you over Hobo-toge Pass, the border between Owase and Kumano. In addition to its historical significance, this route also offers beautiful stone paths and the wall to keep animals out amidst deserted terraced fields. This route is also lined with graves of pilgrims, perhaps already tired from Yakiyama, they reached here and couldn't go on anymore.

The grave of Sone Danjo 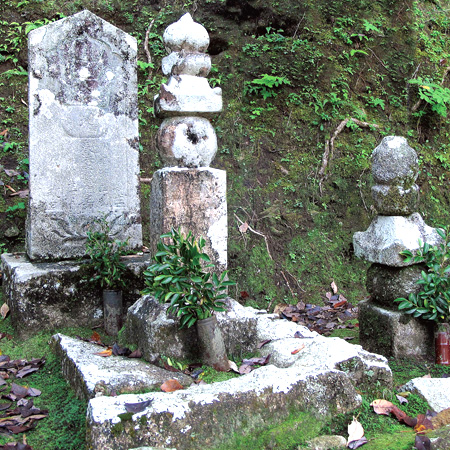 About 450 years ago, people in this village were at the end of their rope over the deterioration of public safety in this area. They asked Sasaki Uemon for help.
After arriving from central Japan (Shiga) took on the name, Sone Danjo and he restored peace and law to the land.
Shishigaki

This stone fence was built to protect fields and paddies from wild boars. At the south end, there is a memorial stone commemorating its completion, something that is usually not seen in other parts of the country.
The stone quarry

Not far from the trail, there is a quarry that provided some of the stone to build the grand Edo Castle in present day Tokyo. The Shogun demanded lords from all corners of Japan to provide the stone to build him the greatest castle in Japan and keep the lords busy.
Idle hands are the devil's tools! They chiseled holes and used wedges to cut the huge stones, and scraps were used to pave this path. You can find chisel marks in some of the stones around here.
Hobo-toge Pass
（Where Hoji Teahouse once stood） 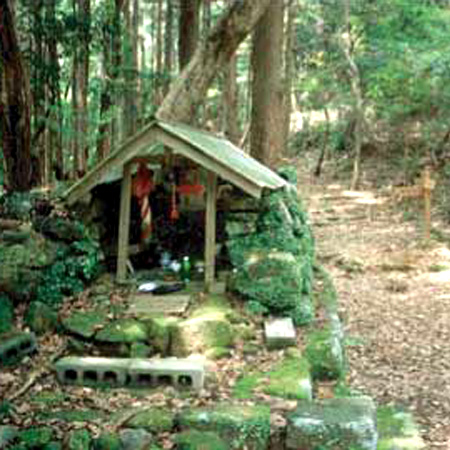 This teahouse got its name because this was the border between the kingdom of Shima to the north and Kii to the south in the middle ages (about 600 years ago.)